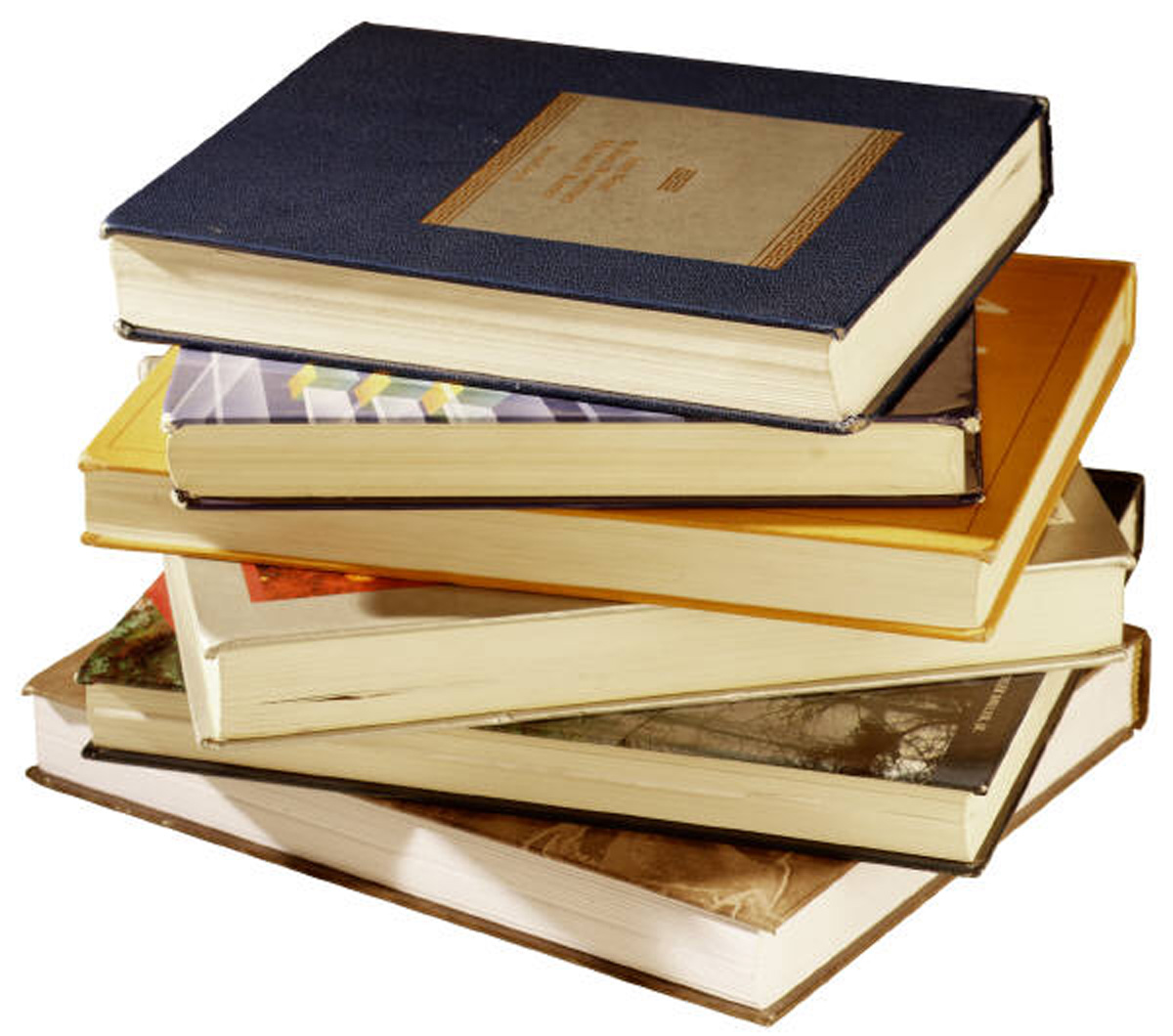 My research examines the intersectionality and negotiation of a number of religious traditions found within America and other western nations, Eastern religious traditions, particularly Buddhism and Hinduism, esoteric traditions, and science, all explored through embodiment in time and space. My long term goal is to better explain how religious traditions, such as Theosophy, Spiritualism, Western Buddhism, Mormonism, Wicca, and Scientology, among others, are able to employ representations of science, its language, and methods, as a means of undermining its epistemology, and substituting alternative epistemes, such as Theosophy’s claims of an Ancient Wisdom tradition, a form of perennialism. By focusing on the body and its emplacement, these traditions are able to construct realities for their members, which in turn, foster ongoing religious innovation, furthering the tradition. Ultimately both lived religion and its intellectual basis are mutually constituting.

Below are my dissertation, current, and past research projects:

Dissertation: Occult Bodies: The Corporal Construction of the Theosophical Society, 1875-1935 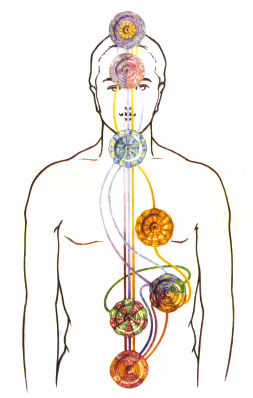 Focusing on the Theosophical Society, founded in 1875 and headquartered in Adyar, India, the dissertation traces how the emplaced body, variously understood and experienced, and discourses of science, as appropriated and applied to Theosophical doctrine derived from both modern and ancient wisdom texts, were mutually constitutive for members of the Society. That is, Theosophists came to understand their body’s makeup and constitution, how it should be cared for, nourished, and disciplined, as well as its place within the cosmos, and the reason for its existence, through the ideas, discourses, and doctrines of the Society. These ideas, texts, and discourses were presented using the rhetoric of science, and in doing so, were made authoritative. The result was a Theosophical understanding of the body based on the teachings of Ancient Wisdom as combined with, and legitimized by, scientific discourses.

Yet, much like the scientific discourses Theosophy engaged and adopted, the doctrine, texts, and ideas of the Society were not static, at least not completely. They had to respond to the needs and practices of the members, as well as to changes and development on the world stage. Thus, the texts, doctrines, and discourses were created, modified, and ignored based on the unfolding practice of Theosophy by the members. The end result was a dialectic process in which both body and discourse were mutually constituting. Moreover, the intersection of the body and scientific discourses within Theosophical teachings facilitated the mediation of larger sociocultural changes, including secularization and the crisis of faith, ascendency of scientific materialism, and shifting international political structures due to nationalism and colonialism at the end of the nineteenth and the beginning of the twentieth centuries. Not only were body and discourse mutually constituting, the dialectic process was how Theosophy was able to respond to change, both within the tradition, and to larger sociocultural forces outside it.

The history of Buddhism in the West, particularly Buddhism in America, is one in which Buddhist immigrants and American converts lay the foundations for Buddhism’s flowering, especially in the 20th century. Yet the histories rarely give significant notice to the fact that for almost two decades before the World Parliament of Religions, in 1893, Theosophists had traversed North America innumerable times, promoting Eastern religious ideas, particularly reincarnation, karma, yoga, meditation, vegetarianism, and cremation, through extensive lecture circuits. Additionally, they were prolific in their publishing efforts of both books and journals, and were also keen in promoting their ideas within the nation’s newspapers. These efforts at promoting Eastern ideas, legitimizing them through the language of science, and using Western methods of mass communication, resulted in widespread dissemination of Eastern ideas to the point where they became ubiquitous and disconnected from their earliest sponsors, The Theosophical Society.

While scholars of Buddhism readily admit some Theosophical influence, there is considerable resistance within Buddhist studies to recognize the widespread influence of Theosophy and occultism regarding the Western adoption of Buddhism. At most, Theosophy gets mentioned in the context of its deployment of scientific discourses of Buddhism, but little else. As of today, there is no single article, essay, anthology chapter, or monograph that traces the widespread influence of Theosophy on Buddhism in the West. Within the last few years, more scholars of Buddhism in Europe have come to acknowledge the influence of Theosophy. In 2015 the University of Heidelberg hosted a conference titled, “Theosophy Across Boundaries.” Part of the program description states, “Dealing with theosophy may challenge our way of looking at things – such as the division of religion and science – because it challenged them. One challenge lies in recognizing theosophy as a crucial agent of global transfers of religion and transfers of Western knowledge. Indeed, it is perhaps the most overlooked agent in this latter transfer.” 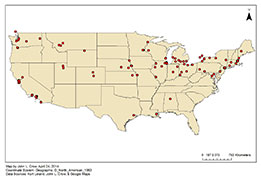 One of the challenges to this research is that the evidence is widely distributed between thousands of periodicals, each giving small pieces of the overall picture. Assembling these fragments to demonstrate a comprehensive influence of Theosophy is daunting. To facilitate this research, I have employed the use of digital humanities technologies and methodologies, including the creation and programming of a web platform with which to facilitate the collection, organization, transcription, linking, tagging, and visualization of various types of data including journal, magazine, and newspaper articles, lecture and meeting locations and topics, personal correspondence, photographs, and other documents all of which can be combined and visualized through charts, diagrams, and timelines, as well as on maps using geographic information systems (GIS) techniques. Currently the platform is still being developed and data is being collected. Nevertheless, it has already facilitated the dynamic mapping and listing of Annie Besant’s eight American tours undertaken between 1891 and 1929. An early, non-dynamic version was produced in 2014 which looks at the tours in comparison to US census data. Once enough of the platform is complete and sufficient data is collected to convincingly make the case, a monograph will be the immediate end result of this research, although the platform will present opportunities for additional research. 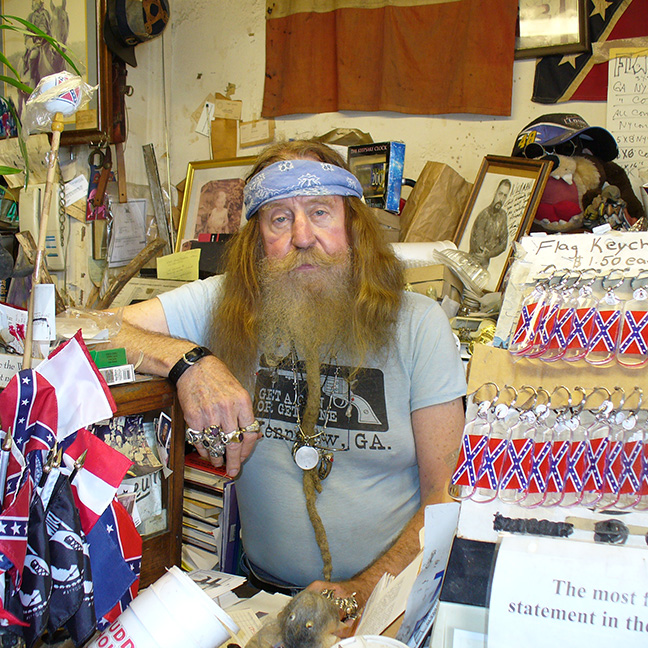 Cobb County, Georgia, is one of the most conservative Christian counties in the South. It contained the district from which Newt Gingrich was elected and led his conservative Contract with America. Additionally, Cobb County was banned from participation in the 1996 Atlanta Olympics because it refused to repeal its laws condemning homosexuality, and tragically, it is also where Leo Frank was lynched in 1915. In the northern part of Cobb County is the city of Kennesaw, formerly, Big Shanty. In the center of historic downtown Kennesaw is a store called “Wildman’s Civil War Surplus and Herb Shop,” owned by Dent “Wildman” Myers. What makes Myers significant is not that he always carries two holstered guns on his hips, or that he was a General in the reenactment of the Confederate States Army (CSA), both of which are true. It is not even that he sells Nazi, KKK, and white supremacist collectables alongside his vast inventory of Civil War artifacts and is one of the only places where a person can buy every version of the Confederate States of America flag in various sizes, both in vinyl and cotton. What makes Myers unique is that within this conservative Christian county, Myers operated a local occult organization from approximately 1958 through 1963 based on the ceremonial magic tradition of British occultist, Aleister Crowley. Moreover, he did so openly, and received no resistance from his neighbors, community, or county. 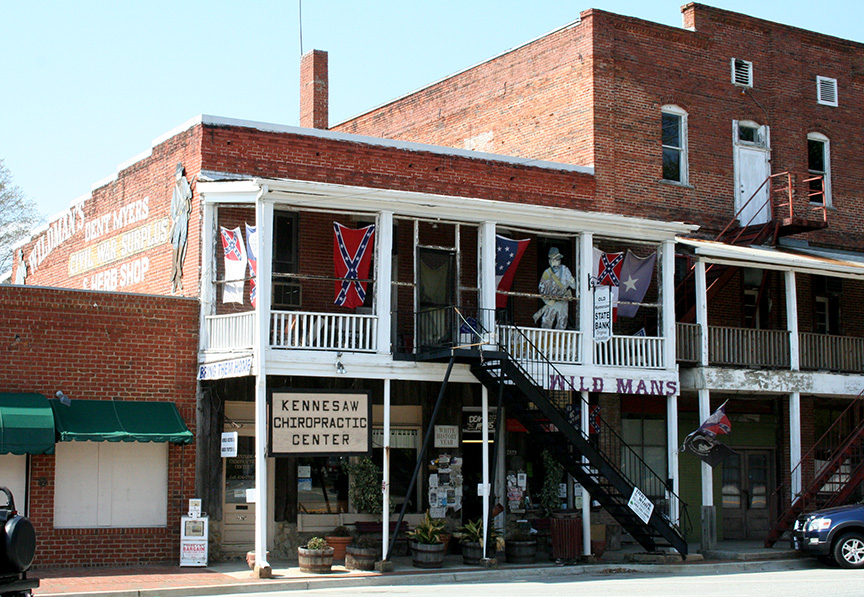 This project examines and contextualizes the life of Dent Myers, asking how, in a conservative Christian county, did he openly operate an occult group with approximately a dozen members without any difficulty. The answer is, in part, because he was white, male, racist, and had significant political connections. Much of the narrative of religion in the South promotes the singular importance of Southern religion. Yet Myers was able to reject Christianity, amass one of the largest occult book collections in the South, and openly practice ceremonial magic. This was possible because Myers was fully embedded within the Southern culture, and had connections with prominent community and political leaders. While Myers was learning Rosicrucian occultism, he was also spending time with Lester Maddox and George Wallace, being a prominent member of his community. Myers, an amateur painter, produced a portrait of Maddox which was conspicuously displayed in the Governor’s mansion. Despite having never completed high school, the mayor of Kennesaw appointed Myers a member of the historical committee charged with bringing “The General” back to Kennesaw from Chattanooga, Tennessee. Today, the locomotive is in a small museum across located the street from Myer’s store. Also Myer’s involvement with the CSA resulted in him being a leading organizer for the CSA’s centennial reenactment of the Battle of Kennesaw Mountain.

The goal of this project is to produce a monograph documenting Myer’s life, using it as a means to explain how in the South, race, gender, and politics can supersede potential religious objections despite claims about the significant role of Christianity in one of America’s most conservative counties, even when it concerns openly practicing the occult. This project not only has significant implications today, when racist discourses are becoming more common in the media, but also because esoteric traditions and rhetoric are becoming prominent within these white supremacist discourses. 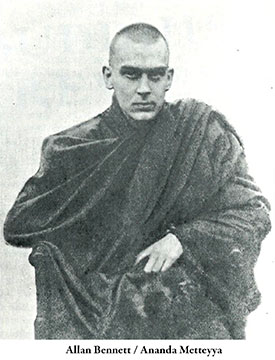 My Master’s thesis was a biography of Allan Bennett. Bennett was a British Roman Catholic who rejected the church, adopted science, and studied analytical chemistry and engineering. He also became involved with the Theosophical Society in the early 1890s, and later joined a ceremonial magic group, the Hermetic Order of the Golden Dawn, becoming one of its most respected members. In 1900, due to health reasons and disillusionment with magic, he traveled to South Asia. First to Ceylon (Sri Lanka) and then to Burma (Myanmar). In 1902 he then took ordination and became a Buddhist monk, and the next year he started the International Buddhist Society and began publishing a journal in English promoting Buddhism. In 1908 he led a Burmese contingent to London on a six-month missionizing trip aimed at promoting Buddhism and obtaining converts, and many consider this mission as the beginning of British Buddhism.

When I wrote this thesis I found that the history of Bennett is bifurcated. Historians of occultism stop mentioning Bennett after his trip to Asia. Conversely, historians of Buddhism ignore his early years and only pay attention to him after his conversion. My goal was to write a more integrated study, demonstrating how the earlier period was significantly influential on the latter period. However, the thesis ends at 1908. The project would be to co-write a biography of Allan Bennett with Dr. Elizabeth Harris, a specialist in British Buddhism and former advisor for my MA thesis. A second volume of edited writings would also be produced. 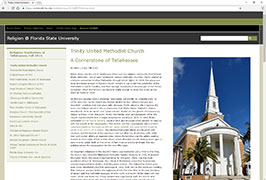 Digital pedagogy possabilities within online learning environments have spanned from using blogs and social media to working with students to create an online repository to store the research they create. In a project, The Religious Institutions of Tallahassee & Digital Artifacts, lasting two semester, I worked with students to trace the history of local religious institutions, collecting and documenting various historical aspects of the institution and interviewing institutional representatives. They then created an institutional exhibit showcasing their results. While those who chose a different topic wrote blog posts, essays, or created movies which they collected and submitted to the repository as "digital artifacts." The repository is now part of Florida State’s special collections showcasing undergraduate scholarship in religious studies.