The Bodily Torment of Hell

This is a place where eternally
Fire is applied to the body
Teeth are extruded and bones are ground
Then baked into cakes which are passed around.
From “Hell” by the Squirrel Nut Zippers

This morning in the shower I found myself singing the song “Hell” by the Squirrel Nut Zippers. It’s a catchy tune from mid-1990s that I heard on Spotify recently. What stood out to me, however, is how the song described the bodily torment in hell. Fire is applied to the body, teeth are extracted, ouch!, and bones are ground up. Sounds quite gruesome. But, then I thought, this is odd, in typical depictions of hell you don’t have a body… 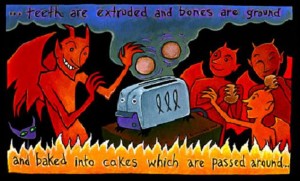 I started thinking more about it, and almost all depictions of hellish suffering are based on body metaphors. Niflheim, the hellish world of Norse religion is described as a cold, frozen wasteland located next to the Shore of Corpses. In this case it’s not fire applied to the body, it’s ice. In Greek myths, those judged negatively found themselves in Tartaros, a deep black dungeon full of torture and suffering. This is where Sisyphus eternally labored, Tantalus suffered hunger and thirst, surrounded by food and water he could not consume, and Ixion was strapped to a spinning, burning wheel. Combining both the fire and the ice, the Buddhist Naraka realm has both hot and cold hells. Descriptions include molten substances poured down throats, or freezing and then one’s body bursting into millions of bits, only to be reassembled and burst again. Other hell torments include being boiled in oil or the skin freezes off exposing the internal organs to the cold causing great pain. In all these cases, the body is the central metaphor for expressing the kind of suffering experienced.

I can only think of one other description of hell that was very different. But even it has a bodily metaphor to describe it. In the movie, The Prophecy, Christopher Walken plays the angel Gabriel. At one point he says, “Do you know what hell really is, Thomas? It’s not lakes of burning oil or chains of ice. It’s being removed from God’s sight, having His Word taken from you.” Seeing and hearing are the metaphors of God’s presence, and absence. The senses are still central, but the suffering is the loss of presence.

The use of the senses to express the kind of mental torment one could experience in a hell realm is not surprising. The body is the center of all experience in the world and how we come to terms with our surroundings. Hell is used as a deterrent to particular behaviors or beliefs. To make the threat concrete in the minds of people, the concrete experiences of the body are appealed to, making the potential threat imaginable, and undesirable.

I am constantly amazed at how often the body emerges as the central metaphor. It is the means by which religion is practiced, experienced, and where thinking and believing take place. However, since it is so central and omnipresent, it is frequently forgotten. When applied to hell, especially in a Christian context, how often do people think about the contradiction of describing the torments of the soul by using body metaphors? Perhaps the question is, if we don’t use the body, what else would we use?