What Happens When a Symbol’s Meaning Changes?

Much has transpired recently regarding the killing of nine African-Americans in South Carolina and its impact galvanizing those who see the Rebel Flag as a symbol of racism and hate. Living in the South since the early 1990s, I have seen the flag frequently in both Georgia and North Florida. I have heard the argument that it represents heritage and is not a symbol of racism. Assuming this is true, for the moment, such an argument still misses that symbols change and their meanings evolve. This is something that I have had to examine in my study of the Theosophical Society because another symbol of bigotry and hate, the swastika, is part of their organizational seal. 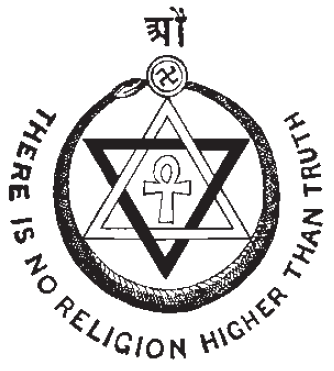 The Theosophical Society was founded in 1875 in New York City and promoted Eastern ideals and traditions, particularly Hinduism and Buddhism. The swastika is a common symbol within these traditions and has been used within the iconography for centuries. Even today, if you are in some Asian countries and see a restaurant with a swastika on its sign, it means the restaurant serves Buddhist-friendly vegetarian food. Thus, it is not surprising that the society adopted the swastika as part of their logo. At one point, Blavatsky explained the swastika “is the summary in a few lines of the whole work of creation, or evolution.” It is a symbol of the dynamic aspects of creation, a point Theosophy stresses.

But we all know that the swastika was also adopted by the Nazi party as their emblem and is connected in the minds of most people to the racism and genocide of the Nazi regime. This was done fifty years after the Theosophical Society incorporated the symbol into its seal. Yet, now that the meaning of the swastika has changed, many claim that Theosophy, and in particular its founder Madam Blavatsky, is racist. Despite the fact that Blavatsky died two years after Hitler was born, there are numerous websites which use the inclusion of the swastika in the TS logo as evidence for its connection to Nazism.

The claims that Blavatsky was a Nazi are so common that Theosophists have had to respond. Much like those claiming the Rebel Flag is about heritage, Theosophists attempt to correct those with erroneous views connecting Blavatsky, the swastika, and Hitler. For instance in one essay, plainly entitled “Was Blavatsky a Nazi?,” the author begins stating the obvious: “H.P. Blavatsky was not a nazi. She lived and died in the 19th century when nazism didn’t exist yet.” Nevertheless, such connections between Blavatsky, Theosophy, and Nazism are not so easily assuaged. This is the problem for both Theosophists and those who attempt to uphold the flag as heritage: symbols change, their meanings evolve, and something that was acceptable in the past can come to mean something that is no longer acceptable. 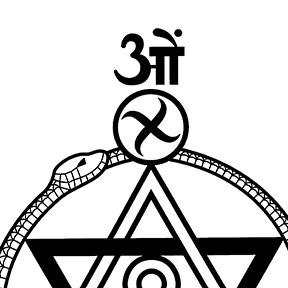 Recognizing that educating the world about the history of the swastika is a losing battle, some in the TS have implemented a change to the seal to make the swastika less obvious. In an updated version of the Theosophical Society seal, the swastika turns from rigid right angles to swirls. While this version is used sporadically, I have noticed it becoming more common. I think this is because those in the organization recognize there simply is no rehabilitating the swastika. The symbol, at least for the foreseeable future, is associated with bigotry and hate in the minds of most. Similarly, the Rebel Flag being associated with racism is a fact those who promote the flag’s heritage are going to have to face too.

Charlie McCrary at: July 1, 2015 at 4:59 AM said...
Is your argument that there might be no "rehabilitating" the Confederate flag, since it has been seen by so many as a racist symbol, a meaning that was assigned to it later on and caused people to forget its original meaning?

John L. Crow at: July 1, 2015 at 7:09 AM said...
Charlie, in general, yes. It is complicated more by the fact that the heritage that gets valorized is one that was attempting to maintain a system of oppression and how, over time, the flag’s use has broadened to become a symbol of the South. Nevertheless, the way the Rebel Flag has been recast in the eyes of the general public, both Southern and non-Southern, it is no longer a symbol of the Lost Cause, it is now a symbol of oppression and those who wish to reinstitute the system of oppression for minorities. I understand this is problematic for white southerners who are looking to retain, as Chris Springer put it, “symbols to reaffirm their identity.” Nevertheless, the contemporary meaning of the flag is one of racism, oppression, segregation, and bigotry. I don’t think there is any rehabilitating or recasting that.

Charlie McCrary at: July 1, 2015 at 8:09 AM said...
Marking a vegetarian restaurant and symbolizing Nazism are very different uses of the swastika. You're suggesting that the Confederate flag once symbolized the Lost Cause and now is (mis)understood a "symbol of oppression." I see that shift as less than seismic. In fact, I don't see much of a change at all. Keeping in mind that it's the battle flag of a rebel nation whose existence was based on a defense of the enslavement of people, I wonder at what point, exactly, the flag symbolized something other than oppression.

The Theosophists have tried (and perhaps are starting to give up) to reclaim the "original" meaning of their symbol after it was co-opted by something else. I fail to see how that is analogous to the history of the Confederate flag.

Robert Mathiesen at: uly 1, 2015 at 8:36 AM said...
Within European thought, there has long been a viewpoint that if one has any serious personal interest in the occult or esotericism or gnosticism, then that interest alone suffices to make one a fellow-traveller with the Nazis. The philosopher Eric Vogelin articulated this view in a way that commanded wide attention at one time, and perhaps still does in Europe.

John L. Crow at: July 1, 2015 at 8:39 AM said...
Charlie, I think there is a danger in simplifying the Southern cause in the Civil War to being one just about racism and slavery. We, as historians especially, should not be so simplistic. Today the Rebel Flag is generally seen as a symbol of white supremacy. But this is a result of many uses of the symbol in the latter part of the 20th century. The reason for the South’s entry into the Civil War was complex and the Rebel Flag as a rallying symbol for the soldiers participated in that complexity. Things such as states’ rights, agrarian life styles, and economic concerns, including slavery, were some of the many reasons the South seceded. But that complexity is more or less gone. Now the flag just means racism and white supremacy. This is my argument. The use of the flag by Dixiecrats, college frats, and white supremacist groups throughout the US, not just in the South, have changed the symbol from one that connected to the complexity of the South’s involvement in the Civil War to simply a symbol of hate.

John L. Crow at: July 1, 2015 at 8:51 AM said...
Robert, your comment is interesting. When did Vogelin write this? Perhaps as Europe has secularized this has changed. These days the academic study of occultism is making great headway in Europe but is still very stunted here in the US.

Robert Mathiesen at: July 1, 2015 at 9:16 AM said...
Vogelin was most active along these lines in the 1950s and early 1960s. He died in 1985. He fled Nazi Austria in 1938, and arrived in the United States a year or two later. He accepted a high-prestige academic chair -- Max Weber's -- in Munich (1958-1969), but returned to the US to finish out his long career. In his writings he appears to be something of a heterodox Christian traditionalist (with a lower-case t) -- yes, I know that sounds like a contraditciton in terms. He definitely does not fit even approximately into any of the usual old categories of philosophy or politics.

Robert Mathiesen at: July 1, 2015 at 9:18 AM said...
PS Yes, you're right about the growth of the academic study of these things in Europe, and also here in the US. That delights me no end.

Charlie McCrary at: July 1, 2015 at 8:10 PM said...
John, I don't want to debate the cause of the Civil War in this comment section. I just wanted to say that that I disagree with the argument [Blavatsky:Nazism::Lost Cause southerners:white supremacy].

But I think this discussion probably got off on the wrong foot anyway. As the Culture on the Edge folks like to point out, referencing Bayart, there is no identity, just acts of identification. Likewise, symbols have no inherent meanings, only uses and deployments. The signified is not inherent in the sign. Etc., etc. So, if we reframed the question to be about changing uses of a symbol, rather than about the symbol's changing meaning, we might get further in discussing historical contexts. But enough vague theorizing; let's go to a text.

"To the man that waited on me at the Starbucks down on Main, I hope you understand When I put on that t-shirt, the only thing I meant to say is I'm a Skynyrd fan."

How do we analyze the character's use of a symbol. Is he simply ignorant about what the symbol really means? Is the barista ignorant? Do they just have two points of view that might be reconciled through dialogue and mutual forgiveness (of "gold chains" and "iron chains," respectively)? But if we see the symbol as a simply a "floating signifier" that can be employed to whatever ends--e.g., expressing Skynyrd fandom or starting a race war--how does that obscure the positionality of the symbol's users? To be more specific, using the analogy from your post, is Brad Paisley's character like Blavatsky, or a vegetarian Buddhist restaurateur, or a Nazi?

Robert Mathiesen at: July 2, 2015 at 9:43 AM said...
For further clarity: socially useful signs are never established by individuals in solitary isolation, but ony and always by groups of individuals in cultures. (So long as a sign remains known only to the person who created it, it has no social utility.) The individual is never the master of the signs that he employs.

Also, in classical sign theory, a sign always contains two componemts, a signifier (Saussure) or experssion (Hjelmslev) and a signified (Saussure again) or content (Hjelmslev again). The expression is always something material that can be preceived by one or more human senses directly. The content is something mental, shut up within the individual's body and only inderectly accessible to others. Different fromeither of these two things, and not always present, is the referent, which is the material objects that lie behind the content of the sign. The referent may be simple (as with a horse), compound (as with a unicorn, which combines horse and single horn) or absent (as, perhaps, with Cthulhu). This three-fold distinction in sign theory is at least as old as the Stoic philosophers (see Benson Mates).